FAQ: When does nexus go away? 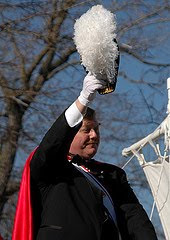 So you have nexus in a state, perhaps because you have a sales rep visiting the state regularly. Then you fire him and decide not to pursue any additional business in that state. When can you stop filing returns?

There are generally no clear answers.

The easiest one, if not necessarily the most desirable, is if the state actually has officially said something on this. So the first places to check would be the state statutes, regs or policy statements. You may not like the answer.

There are four other suggested options that I've heard of:

4. The most aggressive attitude I've heard of is one full reporting period. So if you file monthly, and the rep is fired in May, then you would cease filing in July. Good luck with this one! Although, it would probably be the course I'd follow, assuming there was no other law on the books in that state.

Oh, one more thing. You may have nexus for multiple reasons. So just because one source goes away doesn't mean you don't have nexus anymore. Be very careful.

Here's information on our upcoming seminars and webinars

Picture note: the picture above (he's waving - get it?) is hosted on Flickr. If you'd like to see a larger version, click on the picture, then click on the "all sizes" button above the picture.
Posted by Jim Frazier